The high profile killing of George Floyd and subsequent trial has forced many Americans to examine systemic racism and its role in criminal justice over the last year. A new PBS NewsHour/NPR/Marist poll suggests that more Americans are now recognizing disparities in the lived experience of people of color in the U.S., especially in regard to policing. 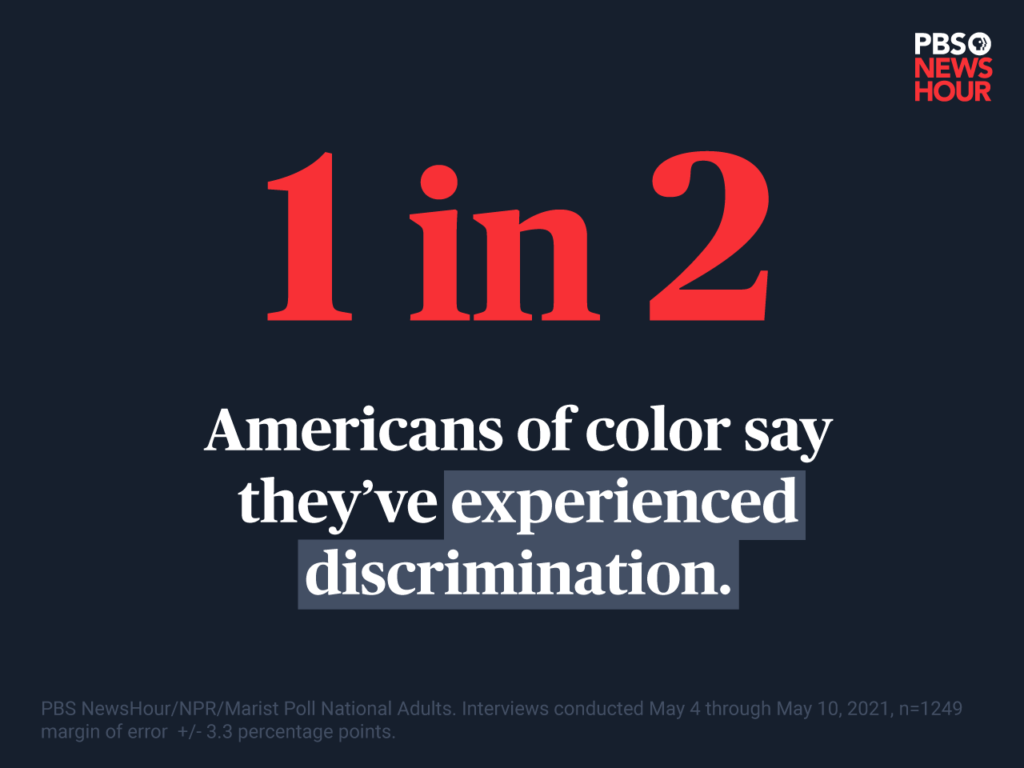 On April 21, a jury convicted former Minneapolis police officer Derek Chauvin of murdering Floyd, nearly a year after Floyd’s killing. Most Americans — 77 percent — agree that Chauvin was guilty of murdering Floyd, including nearly all Democrats and most independents. But 15 percent of Americans disagree with the trial’s verdict. Republicans are split, with 52 percent saying they agree with Chauvin’s conviction. Looking across race and ethnicity, 89 percent of Black Americans support the outcome, along with 74 percent of white Americans and 79 percent of Latino Americans. 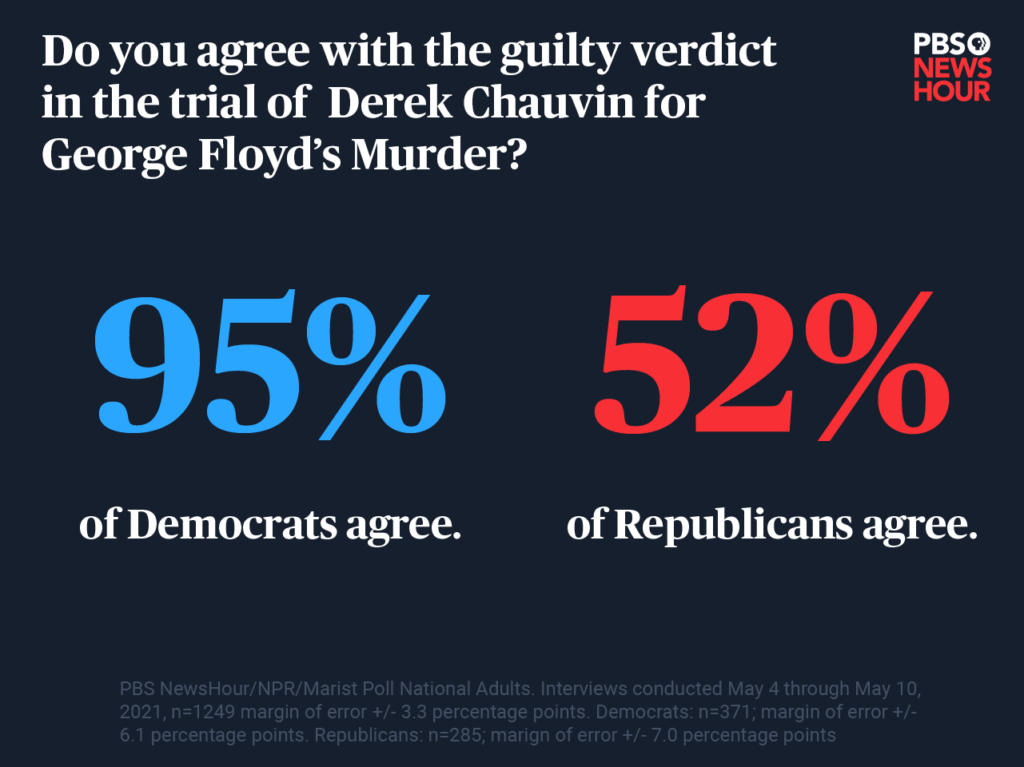 Social justice advocates and experts say more must be done to address how racism has corrupted policing and prevented people in communities of color from feeling safe while enjoying what white Americans often take for granted — being in their homes, driving their cars and walking down the street.

When asked how they viewed race relations today compared to a year ago, 17 percent of Americans said things have gotten better. But 42 percent say race relations have worsened in the time since Floyd was killed.

Polling data suggests overall pessimism has diminished in recent years. In September 2015, a year after a white police officer shot and killed Michael Brown in Ferguson, Missouri, 58 percent of Americans said that race relations were worsening.

“America — we’re less worse than we used to be,” writer, comedian and commentator Baratunde Thurston said when reflecting on that shift in perception. But he added that he hopes the country’s “actions can earn those degrees of progress” in measurable ways and beyond criminal justice, such as maternal and infant mortality, health outcomes and economic stability, so “that we can make things better and not just less worse.”

But when analyzing how Americans view race and racism, it is important to examine how different groups respond, and how much — or how little — those responses resemble each other, said Eddie S. Glaude, Jr., a professor of African American studies at Princeton University. Some of these latest poll numbers, Glaude said, suggest there is “a gulf in experience.”

Overall, 69 percent of Americans said race relations where they live are about the same as they were a year ago. That number drops 30 percentage points, to 39 percent, when asked about the United States as a whole.

Historically, Glaude said data shows that “white America just doesn’t see the state of race in the same way” as communities of color do. But this moment could signal a change, he said.

People aren’t quite sure where we’ll land, but at least we’re there,” he said.

On the whole, Americans are optimistic about the direction the country is heading in addressing systemic racism. A majority of U.S. adults — 57 percent — think future generations will enjoy better race relations than now, including 61 percent of Black Americans and 53 percent of Latinos.

That is encouraging, especially for people of color, Glaude said, because people are having those conversations about race more frequently and “seeing it from a very similar lens.”

For years, data on officer-involved deaths has been difficult to gather — let alone on convictions for those deaths. Between 2005 and 2019, 104 police officers were charged with murder or manslaughter after shooting someone while on-duty, according to a 2019 study from researchers at Bowling Green State University. Of those charged, the study suggested only four had been convicted of murder. There are many more examples of police use of force that shooting data does not capture — including cases like Floyd’s.
A 2019 study published in the Proceedings of the National Academies of Sciences suggested the Black men and boys are killed by police at a rate of 96 per 100,000 deaths. That is far greater than white men and boys, who die at the hands of police at a rate of 39 per 100,000 deaths. 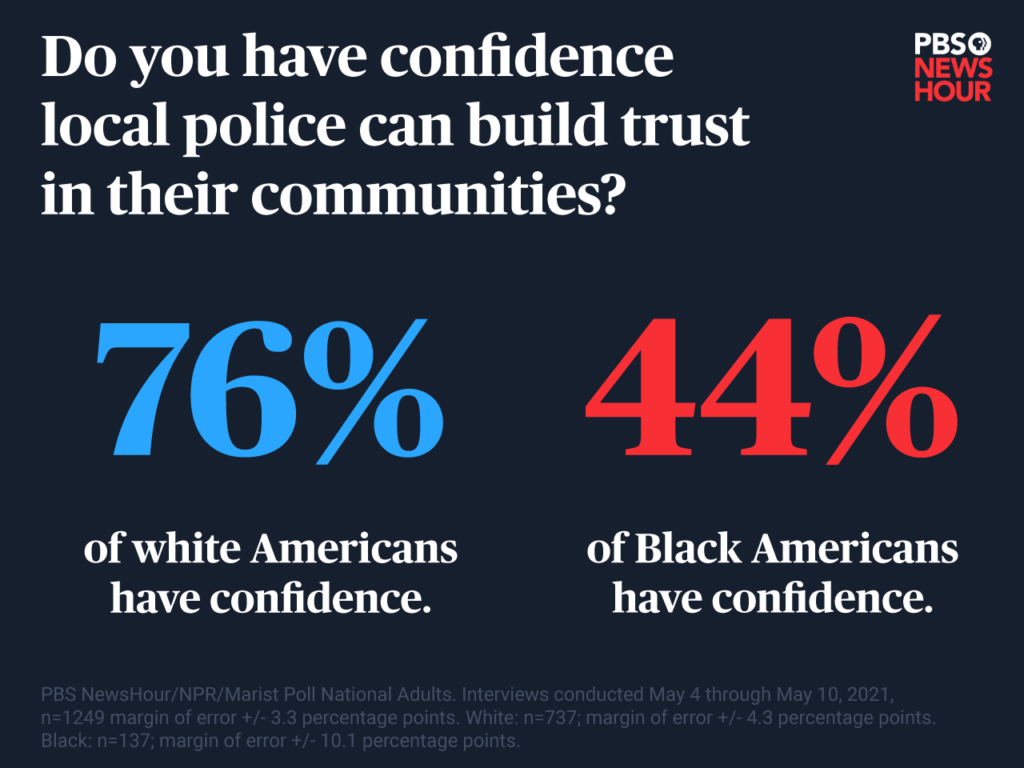 Frustrated with a lack of data, a number of grassroots efforts have emerged over the last several years to independently track these incidents. The Fatal Encounters database relies on public records and crowd-sourced data to build a picture of the risk communities of color face with respect to police violence. Law enforcement may not accurately record what took place in every incident, which can lead to undercounts in data provided by departments.

READ MORE: Can use of force restrictions change police behavior? Here’s what we know

The role of video footage was vital in securing Chauvin’s conviction. Video of Floyd’s final moments made the brutality of Chauvin’s actions irrefutable for many, and ignited calls for social justice. Americans in this latest poll broadly support the use of body cameras on police officers, with 90 percent saying they believe those devices do more good than harm.

The use of body cameras is wise policy for both citizens and police officers, said Michael Williams, a retired Memphis police officer who served as president for the city’s police association. He said that cameras offer an unblinking witness account of what happens when police officers interact with the public in ways that a few seconds of cell phone videos may not, and also serve officers, as they can be used to defend against false accusations.

Williams said he blames Trump for inflaming racism and emboldening racists to act publicly on feelings they may have otherwise withheld privately. More needs to be done, he said.

Thinking about what should happen next, two-thirds of Americans support reforming policies that dictate how police use force, though there is a gap between how white people and people of color perceive the issue. Eighty-nine percent of Black Americans and 86 percent of Latino Americans want police reform, while 62 percent of white Americans do. Slightly more than a quarter of U.S. adults — 28 percent — say there is no need for reform.

Those differing perspectives might be because their experiences with police differ. According to the poll, 61 percent of Black Americans say local police treat people of color more harshly than they do people who are white. Only a third of Americans overall agree, and just a quarter of white Americans feel that way.

A majority of Americans — 53 percent — say police officers where they live treat Black and white residents the same. Sixty percent of white Americans believe that to be true.

Is Biden’s leadership making a difference?

Roughly a third of Americans say they expect race relations to improve under Biden’s leadership. That is compared to about a quarter of Americans who felt the same way in February 2017, shortly after President Donald Trump’s inauguration. But 34 percent of U.S. adults say race relations will stay about the same with Biden and 28 percent said they expect them to further decline, including 65 percent of Republicans. 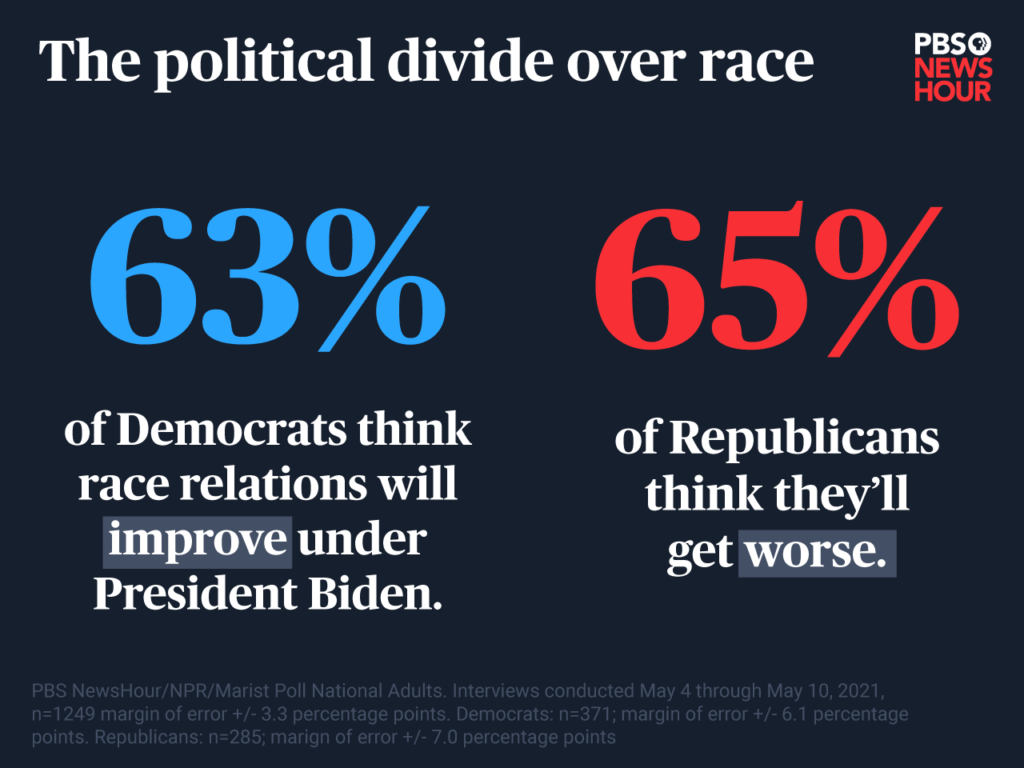 On April 28, when Biden gave his first address to a joint session of Congress, he vowed to pay attention to intelligence reports warning of a growing white supremacist threat in the U.S.
“White supremacy is terrorism,” he said. “We’re not going to ignore that either.”

The Trump administration often did ignore that threat, and many of the perpetrators of the Jan. 6 attack on the U.S. Capitol — Trump supporters who falsely believed Biden’s election to be illegitimate — espoused white supremacist beliefs. Some carried Confederate battle flags into the Capitol. Others wore T-shirts that mocked the Holocaust or apparel with Nazi emblems. 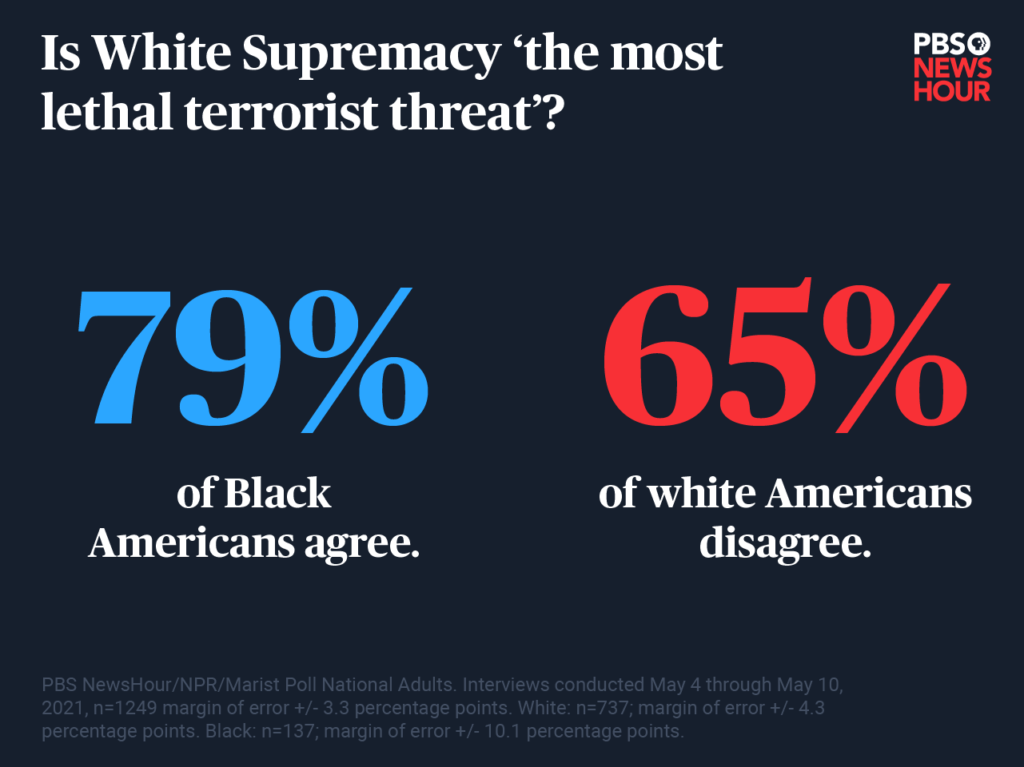 But not all Americans agree that white supremacy is the “most lethal terrorist threat to the homeland today,” as Biden said. Nearly half — 48 percent — of U.S. adults disagree with that statement, including 88 percent of Republicans and 55 percent of independents.

“There’s a lot that divides us,” said Barbara Carvalho, who directs the Marist Poll. “There’s a very strong consensus that things should and can be better and we need to work towards that.”