Timing is everything, and unfortunately for Motorola, any review of the new Moto Edge 5G UW boils down to this one question: how does it compare with the Google Pixel 6? After all, not only did the Verizon variant arrive in stores on October 14th, 2021, just five days before the Google Pixel 6’s launch, it even ended up with near-identical prices as the Google flagship.

The Verizon-locked Moto Edge starts at $549.99 for a 128GB model, and you can double that storage for $599.99, which is $200 cheaper than the unlocked version sold in retail stores. That’s twice as much storage for the same price as an unlocked Pixel 6, plus the Edge supports Verizon’s fast-but-limited millimeter wave (mmWave) network. Given how good a phone the Pixel 6 is, the Moto Edge has its work cut out.

As a midrange phone, the Edge has some impressive specs and features on paper. It has a rare 144Hz refresh rate LCD display, 108-megapixel main camera, 6GB RAM, and the ability to project its screen to a larger display through its Samsung DeX-like “Ready For” mode. In practice, though, the high-megapixel count camera is not as great as it sounds, and its 5,000mAh battery can drain too quickly, but these aren’t even its worse offenses. The Edge’s biggest crime is that it’s just too middling. 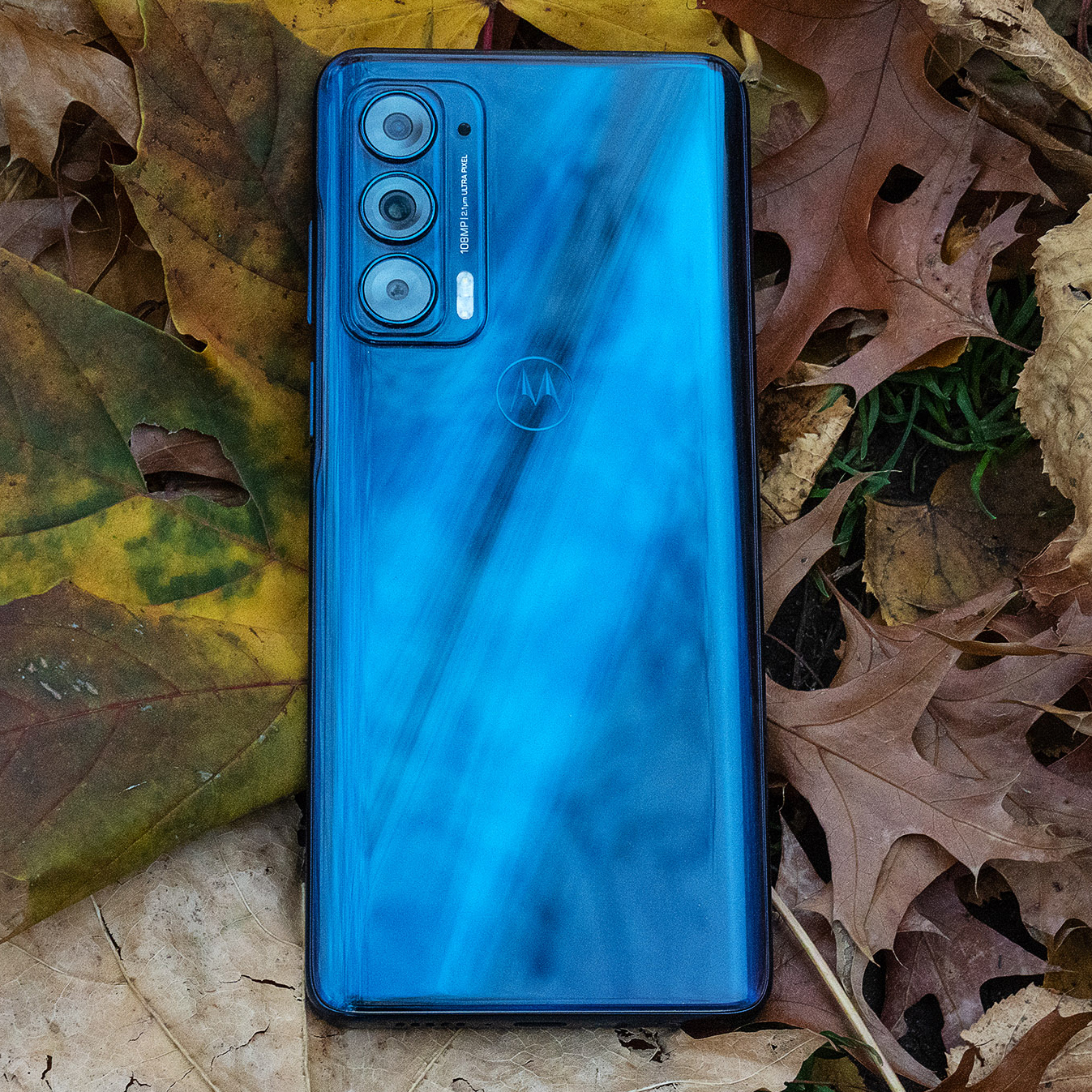 The Moto Edge is all about the monochromatic look, splashing the same “nebula blue” all over the phone — from the buttons to the plate underneath the camera array. It’s a big phone at 6.65 x 2.97 x 0.35 inches, but it’s skinny and thin enough for one-handed use. That said, it’s just a touch too tall for my fingers to maneuver around the screen and hold the phone in the same hand. Despite its all-plastic body, the phone weighs about as much as an iPhone 13 Pro at 0.44lbs (200g or 7.11oz). Its nicely curved edges and back make this phone a pleasure to hold, but that also means its very glossy back cover is a cesspool of smudges and dust.

The rims around the three rear camera lenses remind me of those on the iPhone 13. While their raised edges protect the lenses from scratches, that extra height means the phone can’t really lie flat on the table when the screen is facing up — it ends up rocking side to side. This, combined with its slick back cover, means the Moto Edge is prone to randomly slide off tables and other surfaces, so you’ll want to protect it with a case.

Like the Pixel 6 and OnePlus 9, the Moto Edge doesn’t have a dedicated Google Assistant button or a 3.5mm audio jack anywhere. Its volume rocker and two-in-one fingerprint sensor and power button are on its right side. For a $500 phone, it only has a mono speaker that blasts from the bottom of the phone. It’s louder than you’d expect and turns up the bass by default, so you can really hear the percussive beats in Succession’s theme song.

Unlike Motorola’s G series phones, the Edge has NFC for contactless payments, but doesn’t support wireless charging. Out of the box, the Moto Edge runs Android 11 though it’s unclear when it’ll get Android 12. While Motorola has committed to providing two major OS upgrades and two years of bi-monthly security updates to the Moto Edge, it also said it’ll adjust its software support policy based on how long users will keep using a device, so its promise can be rather fluid.

The Moto Edge’s side fingerprint sensor and face unlock features work quickly and provide good haptic feedback when the unlocking is successful. Face unlock has some customization options: you can choose to press the power button to activate the feature or to simply lift the phone and face the front camera to unlock the phone.

The highlight of the Moto Edge has to be its 144Hz display, even though it’s just a 1080p, 6.8-inch LCD panel. The high refresh rate makes it a breeze to scroll through Twitter and move my pokémon around in Pokémon Unite. It’s too bad the screen is relatively dim, so I have to set its screen brightness to about 90 to 100 percent for indoor and outdoor use — any dimmer than that and I’d have trouble reading text in direct sunlight.

I’ve been testing the $549.99 model with 128GB of internal storage, which is otherwise identical to the $599.99 256GB version. The Moto Edge uses the Qualcomm Snapdragon 778G processor, a midrange chipset, with 6GB RAM as support. Unsurprisingly, it’s the Pixel 6’s flagship-level components that outperform the midrange Moto Edge.

I played one round of Pokémon Unite on the Moto Edge, which started out snappy and easy to navigate my Charmander. However, the game became so laggy that it was hard to move my pokémon to avoid attacks or to score a goal in the last minute. I played the same game on the Tensor-equipped Pixel 6 to compare. While I couldn’t move my pokémon as easily with the Pixel 6’s slower 90Hz screen refresh rate, the speed of the game stayed more consistent, making it possible for me to score a last-minute goal.

Motorola’s “Ready For” mode is supposed to be able to turn the phone’s 32-megapixel front camera into a webcam for a compatible smart TV or computer, but I couldn’t make it work with my Surface Pro 4 at all. The font on the Ready For PC’s interface was way too tiny to be legible on my 12.3-inch screen. Worst of all, there was so much lag between my mouse clicks and what was happening on-screen that this whole feature was a flop for me.

While its 5,000mAh battery lasts about two days with average use, the Moto Edge’s battery can drain very quickly if you’re doing something intensive. On days where I’m primarily on Wi-Fi and doing lightweight tasks like online shopping, social media doomscrolling, and

listening to a couple of podcasts, I could squeeze almost 11 hours of screen time out of this phone. However, when I was gaming and testing its video features, I managed to drain a whopping 29 percent of the battery within just a couple of hours.

Recharging the Moto Edge is also unnecessarily annoying, thanks to the lack of a charger inside the box — all you get is a double-ended USB-C cable. I had to plug the Edge into my Pixel 5’s 18W charger for a recharge, which took almost two hours. If you don’t have a compatible charger handy, you’ll need to budget $20–$30 for a new cable or charger.

The Moto Edge has three cameras on the back cover: a 108-megapixel main camera, an 8-megapixel ultrawide-angle with Macro Vision (119-degree), as well as a 2-megapixel depth sensor. It also has a 32-megapixel front-facing camera that sits in the middle of the screen, though you don’t really notice that black dot after a while.

As impressive as the Moto Edge’s 108-megapixel main camera sensor sounds, its results are surprisingly unpredictable. On one hand, its f/1.9 aperture and larger pixel size means each pixel can capture more light, even in low-light conditions. I was surprised how well some photos from an indoor interactive art exhibit turned out, even though some shots were not as crisp as others and looked a bit noisy

Photo samples from the Moto Edge 5G UW and the Pixel 6.

On the flip side, the Edge’s cameras have trouble finding and focusing on subjects, whether I’m taking outdoor photos of Christmas decorations or well-lit photos in portrait mode. It often takes several shots and several processing seconds before the camera figures out which part of the image is the subject and which is the background that should be blurred.

I used the Pixel 6 to take photos of the same scenes, and the ones from the Google flagship are consistently sharper, with colors that are more true to life. Photos from the Moto Edge tend to look flat, skew blue, or are overexposed.

The Moto Edge 5G UW (2021) may be a decent phone: its unusually high 144Hz refresh rate on the LCD screen works great; and it has two days of battery life, with a camera that can handle low-light photography if you can get it to focus. But that’s no longer enough to be competitive in the midrange phone race. Unless Verizon or Motorola further drop its price, I find it hard to recommend the Moto Edge over others that offer a better value.

For the price of the 256GB Moto Edge, you might as well get the unlocked Google Pixel 6 instead. It features a faster processor, faster and sharper cameras, and a more energy-efficient battery. While the $599.99 Moto Edge offers double the onboard storage as the base Pixel 6, its flagship-class components and early access to Android software and security updates make it the better investment in the long run.

If you’re a Verizon customer, the Moto Edge might seem like a better deal than the $699.99 mmWave-equipped Pixel 6, but don’t be fooled by the Edge’s lower price tag. The flagship Google phone is worth the extra $100.

If the $549.99 Moto Edge is slightly beyond your budget, the $499.99 Samsung Galaxy A52 5G is an even more affordable 5G phone alternative. The A52 features a 120Hz OLED display and a headphone jack but doesn’t support Verizon’s mmWave network. That’s not something that matters to most people, but the Edge does have it if you want to use Verizon’s 5G network. Plus, you’ll be guaranteed four years of software support from Samsung for the A52 — who knows if Motorola will even follow through on its two-year promise.

Photography by Gloria Sin / The Verge